Stigh’s Scroll: Not a print, but almost as much fun

Last year I was asked to illuminate a scroll for a very good friend. I thought this would be a really lovely thing to do, although my only experience in illumination was drawing and painting a capital letter about 16 years ago. And I can’t even remember what the letter was…

However! Not only was it for a very good friend, not only was the scroll supplied with the calligraphy already done, it was also to be in the style of Albrecht Durer. What red-blooded printmaker wouldn’t want to tackle such a project?

The theme for the illumination was based around the drawings done by Durer in the early 16th Century for Maximillian I’s prayer book. There is a bit of a confusing story about these drawings, because as it turns out, most of the images we see are actually extremely accurate lithographic reproductions made of them in the 19th Century. There’s a brief explanation accompanying one of the images in the British Museum collection: 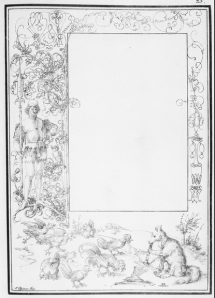 The particular drawing that Stigh had in mind is the one above, where there is a fox playing a woodwind instrument to lure several roosters to within his reach. We thought it would be amusing to turn the fox into a boar, because Stigh’s heraldic device has a boar’s head on it, and to put tiny spurs and chains on the roosters as a symbol of chivalry. Another one which I found to be useful, for the foliage, is the one below: 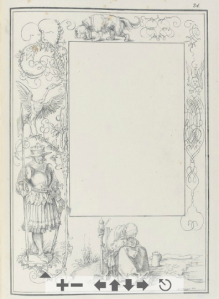 Albrect Durer
Illustration for the prayer book of Maximillan I
Germany, c1512-15

And so I set to work. I usually find it best to gather visual material from books and from the internet, make printouts, and have all the materials I want in front of me as I start, so I can browse through the material and fit things together as the drawing starts to evolve. Although it can sometimes take a long time for all the elements to be found, it makes the actual work much quicker. Below are the sort of images I gather and how they look printed out: 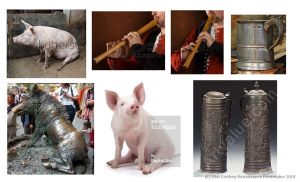 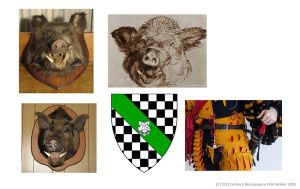 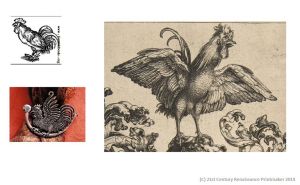 There are in-period prints, such as the Jost Amman and the Albrecht Durer roosters; a little Frans Snyders sketch of a boar’s head; the bronze Boar of Florence; German tankards and even a fabulous Landsknecht codpiece from which to draw inspiration. Stigh was planning a Landsknecht outfit at the same time, so I was able to outfit him in some of the very clothes he wears, plus extra fancy accessories. One of the accessories deemed essential was a tankard, because when one thinks of Stigh, one thinks of a tall guy looming amiably with a tankard in one hand, and quite often a pole arm in the other.

The sketch came together very well. The best available resolution of the fox and roosters was, in fact, awful, so copying was hard, but the other documentation made all the difference. 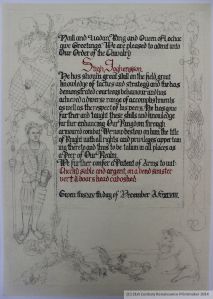 Above: the sketch ready for inking

After the sketch, though, comes the inking. Having not done pen and ink for about 20 years, it was somewhat scary to have to plunge into such an important object. I have to say, though, that I really enjoyed the process. While the portrait of Stigh is not quite right, it is still recognisable, and doing all the details on his outfit was very pleasing. 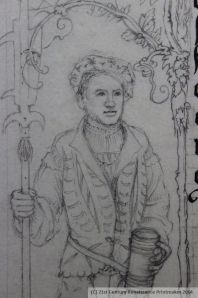 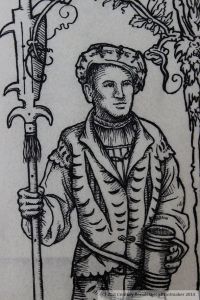 Above left: sketch ready for inking and right: the finished portrait

Although I was pleased with all of the work, the boar was something that was something I ended up being quite proud of. He is a composite from several different sources, but the end result is something which fits into the Durer style and spirit quite well. 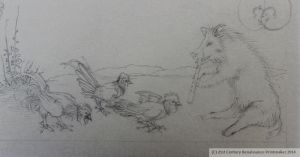 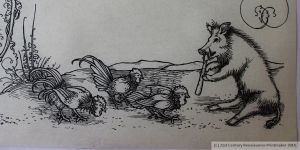 Above left: sketched roosters and boar, and right: inked and ready

Once I had done my job, the scroll went back to the calligrapher for the device (top left) to be coloured in. 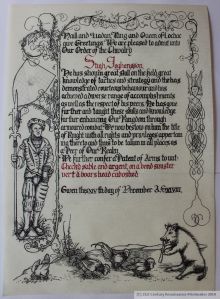 Above: inked and ready for the heraldic device to be coloured

The wise little hen knows better than the roosters, and doesn’t listen to the boar calling the tune…

← Drypoint: Portrait of Helene
Using beeswax as an intaglio ground →

2 thoughts on “Stigh’s Scroll: Not a print, but almost as much fun”